Thank you to all the artists who submitted to “Fantasies” FRCQ online exhibit. I so enjoyed reading everyone’s artist statement and then seeing how their work interpreted the statement. To me fantasies were crucial during COVID and made me aware of the value of appreciating our fantasies and interpreting them in art.

The participating artists used both new pieces they especially created and older pieces that they loved and were originally created as part of an adventure into a fantasy. I often think an artist’s best work is created when they let their ideas flow freely. I saw a lot of that kind of freedom in the various entries. The pieces that seemed to flow as if the artists fantasy was living through art were my favorites.

It was hard for me to pick just one special piece, but I decided that “Party in the Forest” was the piece that let me participate in a playful fantasy. I wanted to see this piece in person so I could feel myself become part of the party. I choose this piece for its imaginative interpretation through an abstract piece that simply moved with expression.   –Jean Herman

Below by Casey Pike
I chose this piece because everything about the Ocean fascinates me. Its a world so different from our own, full of exotic creatures, colors, and vistas. One of my fantasies has always been, like the mermaid, to be part of that world.  Emergent by Sue Lewis depicts a cocoon colony after the butterflies have emerged.  The caterpillars formed a community to find the right environment to support their life cycle.  They found the right conditions to build their safe cocoons on one small branch.  They all entered into creating the safe haven at the same time and emerged simultaneously and burst into flight in all their beauty leaving the cocoons behind as remnants of cooperation.

Emergent, by Sue Lewis, depicts a cocoon colony after the butterflies have emerged.  The caterpillars formed a community to find the right environment to support their life cycle.  They found  the right conditions to build their safe cocoons on one small branch.  They all entered into creating the safe haven at the same time and emerged simultaneously and burst into flight in all their beauty leaving the cocoons behind as remnants of cooperation.

Green Man and Dog by Joan Sowada
While being groomed, the dog slips into a lovely trance.  The air is smooth and aromatic and green.  One can float on the yellow that surrounds the perfect day.

Pandora’s Box, by Gail Strout, is from 2005 but I was involved with magical stories and figures at that time.  And to look back away from my serious responses to today’s world made me feel hopeful.  And maybe we can think about the world’s troubles a little less after opening the box and remembering that hope was in there also.

Party in the Forest by Patti Hawkins
It is joyous fun to conjure what might go on in the forest, after dark!  I LOVE imagining the animals and birds all frolicking in the forest.  I just chuckle envisioning all the laughter, dancing around;
especially in the moonlight!  Because of the pandemic, so much has become too serious! It is only dark to we humans, having lost our ability to “see in the dark”, after electricity dominated our environments.  Because I do love the Aspen trees, I have added small Led light strands to an existing quilt.  Am overjoyed to add a bit of laughter to anyone who ponders my thoughts of merriment going on, after dark, in the forest.

Water Finds a Way by Elaine Hoffman
Water bubbles out of the ground in springs, creates creeks and streams then finds it’s way to rivers and oceans.  I’m always fascinated by how soft water is, yet it can cut through the hardest of substances.  The piece was created using geometric fabric forms combined with hand spun vivid blue flax/linen fibers to create hard and soft shapes, flowing downward.

Winged Goddess Rising, by Sue Lewis, begins life among the roots and rocks below a tree.  She forms a safe burrow among unspoken words buried below the tree.  She develops to full maturity waiting for a winter full moon.  Once the words are spoken and all conditions are present, she rises to fly into the night sky. 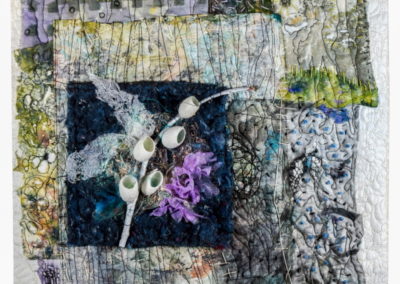 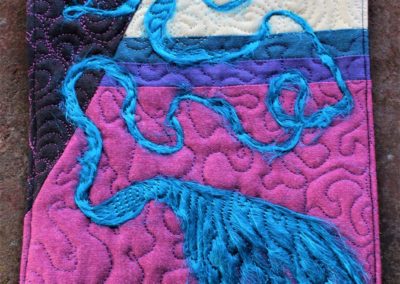 Party in the Forest by Patty Hawkins

Party in the Forest by Patty Hawkins 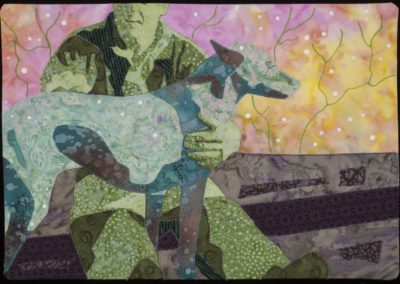 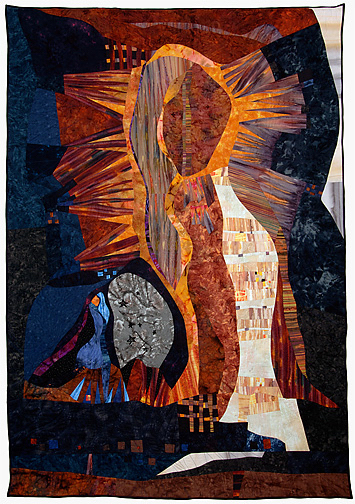 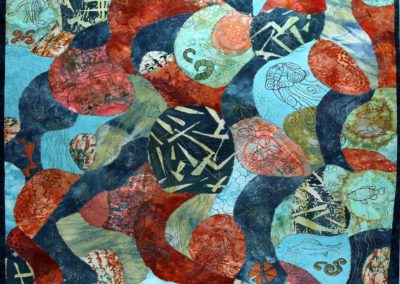 Below by Casey Pike

Below by Casey Pike

Please join this fun, lively artistic group of 150+ members. Our monthly meetings feature international, national or local speakers. Only members are eligible to participate in our dynamic workshops and excellent juried exhibitions. Membership dues are $35 a year and membership runs for 12 months. Dues are $25 a year for Student Members, available for those enrolled in a course of study.  Membership in FRCQ includes all meetings, a high-quality monthly online newsletter, and eligibility to register for workshops. Visitors are welcome to the monthly meetings for a $10.00 fee.

To learn more about becoming a member, CONTACT US.

(If you would prefer to mail a membership form with a check: FRCQ Membership Form)

Location: All meetings are available on-line via Zoom with the link included in our monthly newsletter.  Two to Four times per year, we hold in-person meetings. The location may vary, so please refer to the MEETINGS page on our website for information as to which meetings are in person and where they will be held.